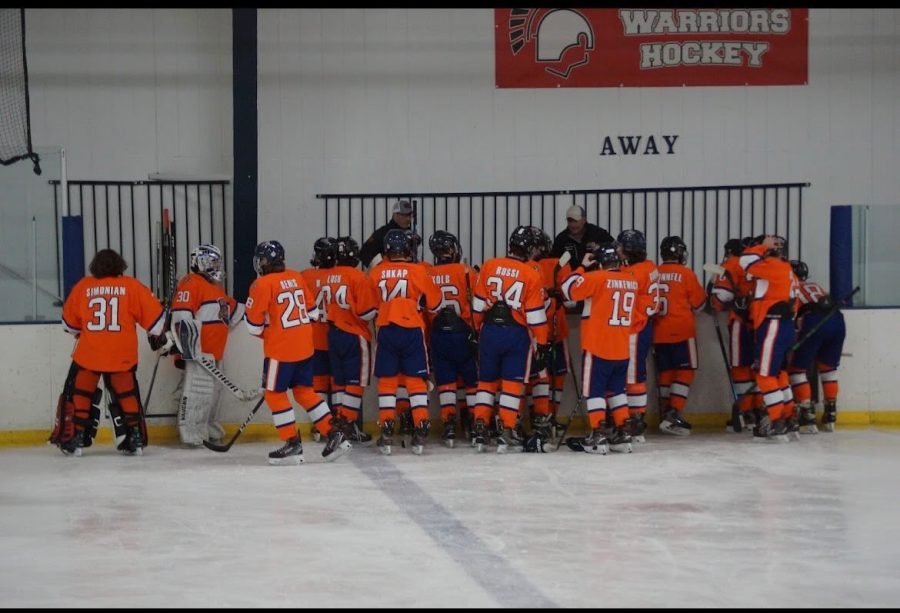 IceCats players listen while their coach talks to them during a game.

On Oct. 6, a fight broke out after the D128 IceCats vs. Lake Forest hockey game. Right outside Glacier Ice Arena, a physical and verbal fight that included 40 individuals took place after a hockey game between the rivals.

A yearbook photographer was present and after their photos had been shown to the Board of Education, it became clear that IceCats, the opposing hockey teams, and officials were not wearing masks, despite the mask mandate put in place by Gov. J.B. Pritzker. This turn of events led to the Board’s decision to separate IceCats from the school district, according to Brian McDonald, the VHHS athletic director. The IceCats are still playing hockey but are no longer affiliated with the district.
Lake Forest vs. IceCats
On the day of the brawl, the Lake Forest Scouts beat the Vernon Hills and Libertyville High Schools’ joint hockey team, IceCats, 5-3, in a game that drew a large crowd.

“The game itself was pretty rowdy,” reported Matthew Weinstein (12), a goalie on the Varsity IceCats team. “We had our own fan section, and they had their own fan section.”

And the fan sections were getting into it.

A journalist from the Lake Forest High School newspaper, The Forester Scout, linked a video of the Lake Forest fan section in their article about the police investigation surrounding the fight. In it, the Lake Forest section is seen cheering and shouting as the players celebrate. The video briefly passes over two fans wearing white plastic garbage bags over their clothes, which can be interpreted as a mockery of their opponents as “white trash.”

Tyler Kolb (11), a varsity forward who scored one of the three goals for IceCats, described what the crowd was like during the game.

“I don’t think we should say what they were saying, but it definitely wasn’t very appropriate.”
Fight
A couple of days after the fight, Dr. Jon Guilliame, principal of VHHS, sent an email informing VHHS families about what happened at Glacier Arena, stating that “a group of approximately 40 individuals (including a number of D128 students) initiated a conflict with a group of teens from Lake Forest High School.” He also expressed his disappointment in this behavior and made assurances that actions would be taken “to learn from this event.”

Neither McDonald, Weinstein, nor Kolb were first-hand witnesses, but all reported that D128 IceCats fans waited outside the doors of the arena for the Lake Forest players and instigated what resulted in a violent fight.

The IceCats team was still in the locker room when it happened.

“We just got texted like a bunch of videos,” said Kolb. “It was everywhere and we just saw it in [Snapchat] stories with videos,” he said. “If no one posted [anything] we wouldn’t even have known.”
Rivalry
The Forester Scout provided context to the drama that went down in early October. Linked in their article mentioned above, was another article regarding a decade-old rivalry between Libertyville and Lake Forest High Schools.

According to the article, the feud is so intense that the Forest Scouts call Libertyville the Town Out West, supposedly because they hate them so much they don’t even want to say their name. In fact, the one comment on the article was “You forgot to censor L**********e a couple of times, but otherwise great work.”

Weinstein and Kolb recognized this rivalry.

“It’s been an ongoing rivalry,” said Weinstein. “Since at least before my sophomore year.”

“Yeah, but it wasn’t like punching one another,” interjected Kolb.

“It kind of escalated over the years,” added Weinstein.

Despite going to different schools, there is not a rivalry on the Icecats team according to Kolb. On the IceCats Varsity team there are only four VHHS students.

“We’ve all played together when we were younger, so we’re all friends already,” said Kolb.
Playing during a pandemic
Early October of 2020, almost exactly a year before the IceCats vs. Lake Forest game, the D128 Board of Education found out the IceCats were playing hockey despite IDPH guidelines.

“We met with them, we said ‘Hey, if you’re gonna stay connected to us, you [have] to comply with the IDPH guidelines and their all-sports policy. And that would mean you can’t play hockey right now.’ And so they said that they were going to stop playing hockey,” McDonald said.

IceCats had been playing hockey in 2020 from August to October. Because IceCats was affiliated with the district, and the district is part of the Illinois public school system, the program was required to follow all Illinois Department of Public Health Coronavirus restrictions. Considering the indoor nature and close contact of the sport, that meant no hockey, at all. According to Matthew Weinstein, during this time they were wearing masks “for a little bit we were, but it kind of just slowly went away.”

At this point, IceCats decided to comply with Covid procedures and remain a part of D128. But after failure to follow procedures a second time, the district decided to separate. However, for the players, this doesn’t cause much change in their playing since, being a club team, IceCats has always done its own thing separate from VHHS and LHS. “It’s not really run by us,” said McDonald. “[IceCats and Thundercats Fencing] don’t pay anything to District 128. That all goes to a parent board that kind of oversees their group.”

Previously IceCats would appear at the 8th-grade orientation, the district website, and would follow the school’s student-athlete regulations. However, as a result of their separation, that will no longer be the case in the future.

“Honestly, as a program, I think it’s better for us moving forward,” Weinstein remarked on the separation.