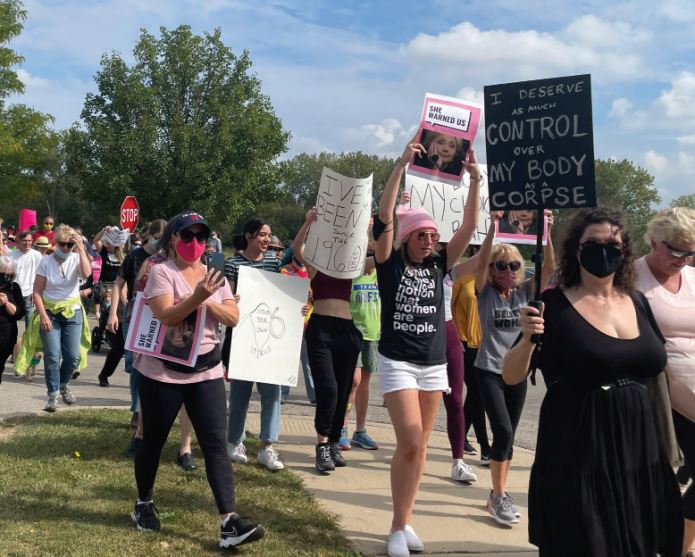 Protesters gather to advocate for abortion rights in Lake County.

On Tuesday, Sept. 14, VHHS’ Junior State of American (JSA) chapter hosted a debate on the Heartbeat Bill. The Heartbeat Bill is an extremely controversial bill which forbids abortion after a heartbeat is detected in the fetus.

This law was passed in Texas earlier this year, and early in September the Supreme Court approved it.

I attended this debate, and one aspect was particularly concerning to me; the two main speakers for both sides of the debate were male identifying students. In a school setting where every student is given the equal opportunity to speak, why was it that two male identifiying students were the featured speakers in a debate about women’s bodies?

Both in the local and national context, female voices need to be the dominant ones in this discussion, whether it may be a school sponsored debate, or a state law.
What happened in the debate is, sadly, almost exactly reflected in what is happening on the national level. Female voices are given opportunities to speak, but it is the male voices that are dominating the conversation.

Main speaker David Wang (11) said that the two main speakers were chosen purely because they were the first two volunteers. Wang did not feel as if he took away a main speech from a female identifying student.

“Everybody in that club had the option to volunteer the day I did,” Wang said.

Wang explained that even if you are not a main speaker, anyone has the opportunity to give a subsequent speech after the main speeches.

“So there’s plenty of opportunity to go around,” Wang said.

Student Tessa Stobart (9) shared some of her feelings over Wang giving one of the main speeches.

“I didn’t have a huge problem with it because he did a good job, but I just think it’s weird that we had a man speak about it. Because that’s already [part of] the issue.”

Stobart was one of the subsequent speakers at the debate.

“I wanted to make sure that everything I thought should have been said was said, [but] I don’t know if I should have because I don’t feel like I did a great job.”

Stobart said that she felt very overwhelmed and flustered when she went up to speak.

I went on to ask her if there was anything about the demographic of the room that might have led to her discomfort at the moment.

She affirmed that if the room had leaned more heavily to a female-identifying population, she would have been much more comfortable and confident getting up to speak about this topic.

“There’s something about having a uterus and getting pregnant that men just do not understand,” Stobart said.

Taking it out of the context of JSA, Dare to Empower sponsor Eileen Baranyk expressed her concern with male identifiers dominating the national discussion.

“I wish there were more women in positions of power,” Baranyk said, “When the majority of state legislatures are male and the majority of the Supreme court is male, then we are just seeing this constant representation of patriarchy.”

Was this patriarchy reflected in the JSA debate? If it was, it was not intentional. As Wang clarified earlier, the main speakers were chosen by volunteers and no one was restricted from volunteering.

According to members on the JSA executive board, the Director of Publicity did not advertise main speaker positions to anyone outside of the meeting just prior to the Heartbeat Bill debate. This could have potentially drawn in more female identifying speakers.

While male identifiyers can be wonderful feminist allies, often many are just not exposed to feminist philosophies and are not provided with tips and tactics to encourage female voices in male dominated fields. This is problematic because it just allows the tint of patriarchy to continue to filter society.
David Wang expressed perfectly where male voices fit into the discussion.

“Male voices should definitely have an opinion [but] they should never overshadow or sort of shout over female voices,” he said.

To add on, male identifers also need to recognize that just being willing to hold this discussion isn’t enough. They need to take it a step further by inviting female voices to be featured in the discussion.

Male identifiers need to realize that at the end of the day, this is a problem that concerns females and their bodies. They need to respect that. And they need to give their female peers the attention required so that they can feel confident speaking up about it.

JSA has noticed and acted upon the need for female voices in their debates. Lora Dohler (12) is one of the leaders of their newly formed gender minority caucus.

“We’re hoping we can use the caucus to help women and other gender minorities feel comfortable speaking up about issues that affect them, without male dominating voices.”

Dohler cited the Heartbeat Bill debate having male identifying as main speakers was one of the issues that sparked the creation of the caucus.

“Right now the caucus is still in its beginning stages,” Dohler said, “We want to give workshops and opportunities [for gender minorities] to practice speaking in a debate format, and feel comfortable giving main speeches.”

Dohler said the caucus is open to any student in the school, regardless of their affiliation with JSA. It can be accessed through JSA or by directly reaching out to Dohler, Jadyn Schwartz (12), or Emma Hoffman (10).