VHHS golf paves their way to the top 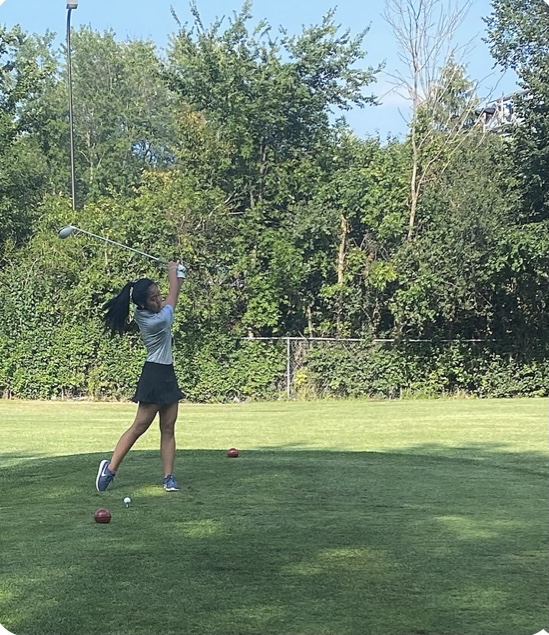 Tiffany Kang drives at the Vernon Hills Course in a match against Maine West.

Vernon Hills golfers have worked their way to State after a successful Regionals and Sectionals, continuing their success this year — a testament to the years of cumulative talent in golfers, to skillful coaches, and to months of work. United on both the green and in day-in work, the golfers have created a team of strength, resilience, and talent.

Thus far, the season has been the most successful in school history, as both girls and boys claimed victory in the CSL Conference, the first of a string of successes that continued at Regionals.

The program has added a shelf-worth of trophies and a list of successes, Regionals being one of them. According to the head Coach of boys golf, Shawn Healey, the program is at its peak: the clustered talent, the individually successful golfers, and the routine of in-depth training.

On the boys team, they finished their regular season with a 9-2 record for their dual-match season, 5-0 for the Central Suburban League and placed first, for the first time ever, in the CSL conference tournament. Healey, who’s been the head coach for 22 years at VHHS attested to their progress.

“In the past years, we’ve been middle of the pack. Out of the 6 teams, we’ve been around third. But this year, we were able to beat both Highland Park and Deerfield during the regular season,” said Healey.

On the girls team, the trend is very similar, with their finish of 359 in the CSL, and the consistently strong team scores over the course of their season. According to Anna Lee (10), one of the top varsity golfers, the team has performed the best they ever had, which she attributes to the bond and passion of all her teammates.

“Being on a team for the first time with a bunch of girls, not during Covid, we could make a bond where we could support each other,” she said.

The golfers’ success does not come at a surprise to coach Healey, but alludes to what the future holds, as the sport continues to gain popularity and attract more talent each year.

On both girls and boys teams, golf is starting to maneuver the eyes of more students and transform its reputation, which Healey attributes partly to the early opening of golf courses during the pandemic.

“Over the last couple years of the pandemic, golf was one of the sports that you could do first because you could get outside and be socially distanced. For the golf industry as a whole, there’s been a boom in the number of golfers. This year we got a lot more players than we’ve gotten in the past,” Healey said.

On the girls’ team, there’s a similar trend, as Anna Lee and Lexi Shulman paved the way with an army of golfers just as strong behind them.

“The scores from the girls [two or three years ago] were shooting scores that now, are OK for us. So I think the sport as a whole is getting more competitive,” said Katelyn Ralph (11).

Healey seconded that observation. Watching the development of the program, he’s gained insight on that progress and the key to any successful team: resilience, power, and mental strength.

“To be a good golfer, you have to be mentally tough because bad things happen on a golf course. Golf is a game that really shows somebody’s character, and if you’re not able to overcome adversity, you’re not going to do well,” Healey said.

According to both Katelyn and Healey, mental toughness is the difference between the first place team and last, and the individual’s ability to adapt, be adverse and read the course is the determinant to their success.

Unlike many sports, golf doesn’t have equal dimensions, but changes with the weather, hills, and terrain.

Since the beginning of October, the boys and girls top varsity players have prepared for the regionals, and the unpredictable October winds. Healey said it’s going to be more important than ever for golfers to implement what has carried their team to success thus far: mental endurance, power, and strategy.

Above all the excitement in the golf community over their success, Coach Healey, said that the wins and the numbers aren’t the only measure of success.

“We’re here for athletes to have opportunities to compete and to get better. And whether we win all of our matches or lose all of them, we will still give the same opportunities to all students,” he said.
Katelyn Ralph
Her golfing started early, around 2nd grade — the year she got her first clubs — and although the takeoff of her golfing interests didn’t begin until just a couple years ago in middle school, she still has found joy and passion in the sport and used the years of influence watching her family golf to evolve into her own golf player.

As a current junior, she plays at the top of JV rankings, and as an alternate varsity player, putting in time, dedication and mental strength. However, to her, golf encompasses more than just physical performance and ranks: it is also the time she gets to bond with her teammates, the small talk and opportunity to socialize, and the mentally-involved strategy and training.

Her favorite part is problem solving and figuring out the trajectory of the ball, where it needs to go and how to approach different situations. Katelyn has proved to be an asset on the team, and embodies what the golf team is: strength, resilience, and positivity.
Anna Lee
Anna Lee is only in her 3rd year playing golf, but her ranks on the golf team are one the top. As a sophomore, she’s shooting at scores very rare to see in newly admitted players, and contributes massively to the team and their record-breaking scores. She may not realize it, but her impact inspires upperclassmen players like Katelyn. Even the coaches take pride in seeing the talent become contagious. Healey describes her success as having a “nice early career.”

Anna shot a personal record of 78, placing 6th in Regionals. On October 4th, she, along with Lexi Shulman competed on the Timber Pointe golf course in Sectionals!