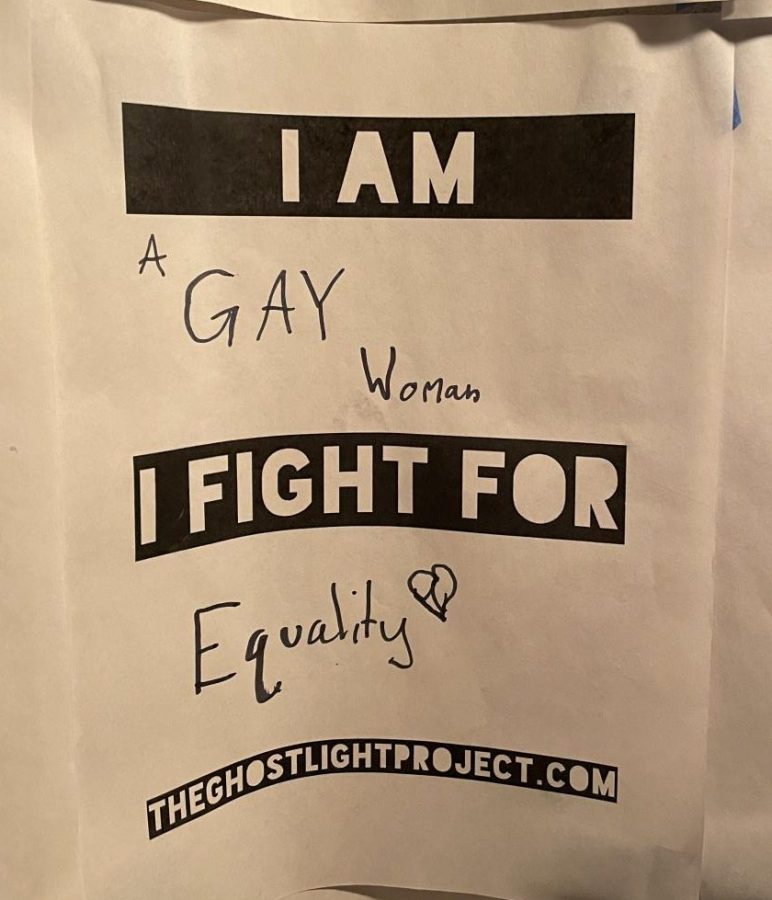 Backlight Theatre Company displays the Ghostlight Project where students express their identity and what they fight for.

Students have observed a rise in awareness and representation for gender identities, sexual identities, and pronouns. LGBTQIA+ students at VHHS shared why queer representation is so important and how the school can make improvements.

“I think social media helped me come out,” said Student One (they/them, 9),who chose to remain anonymous. “It’s really helped me know who I am… and feel more secure in my identity.”

Student One identifies as *nonbinary. As a *transgender student, social media also taught them that there are a lot of people who are dealing with similar things as them, and that provides a sense of comfort for them.

Alex Karston (he/they/she, 12) felt similarly to Student One. “For me, social media is one of the reasons I figured out who I am,” Karston said.

She didn’t know that bisexuality and gender fluidity was even a thing. Without it, they would not have been aware. As the impact of social media has guided many students to come out and discover who they are, there has also been an increase of LGBTQIA+ pride within VHHS. But, according to Karston, there is still more we can do.

He recommended that things like reading more texts with queer characters, including more queer-centered topics in history, and teaching students about sexualities and sexual education outside of *cisgender heterosexual sex.

Karston’s suggestions highlight the queer representation that Vernon Hills High School is missing and examples of ways VHHS can represent the LGBTQIA+ community.

Although many teachers have pride flags and “safe space” signs in their classrooms, Karston said VHHS can do more.

“It’s not true representation. It’s more of a layer of safety for us queer students.” When it comes to LGBTQIA+ representation and pronoun
transparency, Mrs. Baranyk (she/her) is very aware of how to show her support. Her room has several pride flags and a safe space sticker, but she also strives to include LGBTQIA+ studies in her curriculum.

Baranyk has dealt with many experiences in which her students asked her to use different pronouns than ones assigned at birth, so she made the decision to ask all of her students for their pronouns through a get-to-know-you form at the beginning of the year.

“I’ve had a number of students who have come to me and said ‘I would prefer for you to use these pronouns.’ I wanted to normalize that, because I think that everyone should be free to live as their full and authentic selves,” said Baranyk.

*Nonbinary: genders that don’t fall into the male or female category
*Transgender: someone that identfies with a gender different than one assigned at birth
*Cisgender: a person whose identity and gender is the same as their birth sex
*Dead pronouns: pronouns assigned at birth that are no longer used by the person using other preferred pronouns