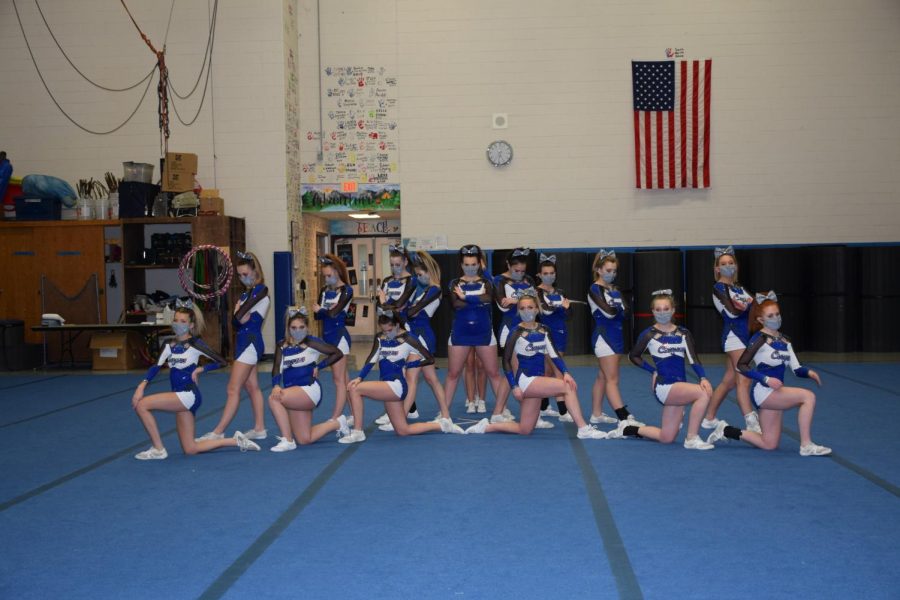 The Cougars Varsity Cheer Team takes the floor during an e-competition in February.

On Jan. 27, high school athletes across the state waited anxiously to hear the fate of their sports seasons. The IHSA Board of Directors stuck to their previously stated goals of allowing every student-athlete the opportunity to compete safely. Ultimately, the Board created a new sports season schedule, along with COVID-19 guidelines.

Winter sports of all risk levels, excluding wrestling, were deemed to start as soon as possible. These will be followed by fall sports such as boys soccer, girls volleyball and football, which will begin in early March. Spring sports are set to start on April 5.

“As you can imagine, some people are really happy with it, while others are not. With 800 schools in the state of Illinois, coming up with a plan that works perfectly for everybody [isn’t] possible,” Mr. Brian McDonald, Athletic Director, said.

Joshua Kramer (12) has experienced the impact of some of these new changes. For example, to practice social distancing, the different levels of the boys’ swim and dive program no longer practice together.

“There are some freshmen that have joined the team, and I don’t even know who they are because I just haven’t been able to interact with them,” Kramer said.

The boys’ swim and dive team hosted a virtual meet against Libertyville on Jan. 30. The athletes swam in their events, and the coaches submitted their times at the end of each event to determine a winner.

Boys’ swimming and girls’ gymnastics do not require athletes to wear masks while competing.

In cheerleading, stunting is not allowed in competition this year. Annemarie Landis (11), a member of the varsity cheer team, described how this new change has affected her.

“It’s been rough because a lot of our routine now focuses on just the tumbling aspects of it,” Landis said. “My favorite part is stunting, so some practices are definitely harder to get through than they used to be.”

Unlike other winter sports, the cheer and dance teams will have a chance to compete in the sectional and state competitions. The virtual competitions have teams record a video of their routine and send it to the judges. They will have a virtual awards ceremony where they receive their placements. The performance aspect, however, just isn’t the same.

“Being in front of a crowd gets you in the mindset of performing,” Landis said. “It doesn’t really feel like a competition anymore. It feels like you’re doing a practice [in] full uniform.”

Many of these virtual competitions are live-streamed so fans can watch. More information on links for games and meets can be found on the VHHS Athletics Twitter.

Lake County is currently in Phase 4, which allows high-risk sports to compete with in the Central Suburban League. This means low-risk sports can compete in out-of-conference and out-of-state competitions along with the state series.

“I’m excited that we’re back competing, ” Mr. McDonald said. “Hopefully people are making good decisions and staying healthy; that’s the way we can put COVID-19 in the rearview mirror.”