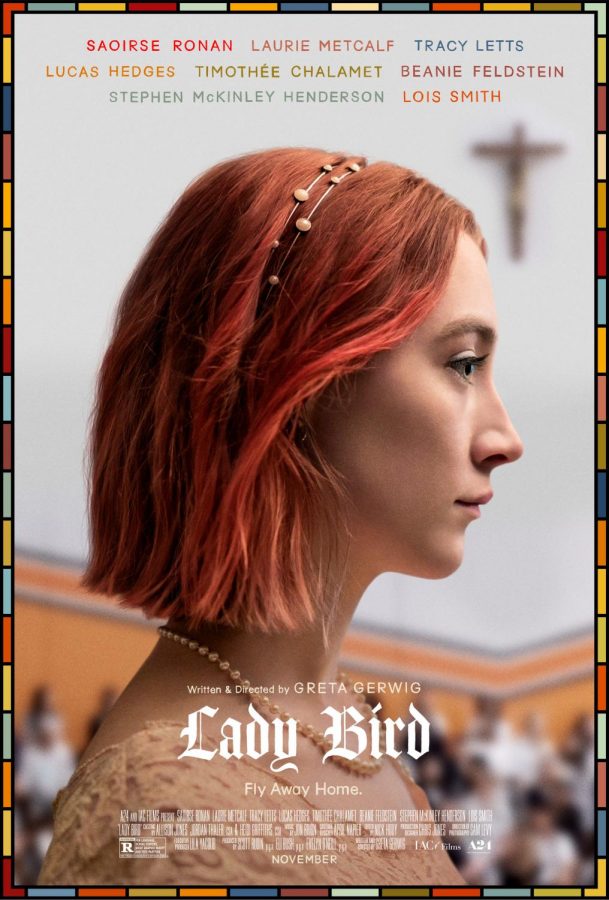 “Lady Bird,” Greta Gerwig’s first feature both directing and screenwriting by herself, is full of exquisite dialogue, beautiful visual quality, and a forward-rushing narrative rhythm. Set in Sacramento, California circa 2002, “Lady Bird” takes on protagonist Christine McPherson (or “Lady Bird,” the name Christine gives herself) on a journey exploring the gray area between childhood and adulthood.

Lady Bird, played by Saoirse Ronan, is eager to leave her hometown and her all girls Catholic School, and wishes to move to the East Coast where “there is more culture.” However, her family cannot afford to send her to college anywhere out of state, which causes Lady Bird to have a disdain for her family and their way of life. Gerwig crafted a hilarious, emotional movie following Lady Bird through friendship complications, moments of insecurity, uncertain fumblings of romance, toxic family matters, and overall her poor relationships with her hometown and herself.

This film was shot on a digital film camera, which creates a visual quality of a memory. Gerwig wrote this film as a loose autobiography, basing the character of Lady Bird on herself. Both Gerwig and Lady Bird grew up in Sacramento, attended an all girls Catholic school, and went to college in New York. Gerwig wanted the movie to look like a memory from the early 2000s, which was when she was a teenager. I really liked this aspect of the movie. Although I was only a baby during the early 2000s, I still feel as though I am looking back at myself when I watch this movie. The grainy texture makes the movie feel more organic.

My favorite part about this movie was the casting. This is the first movie where Saoirse Ronan and Timothee Chalamet work together with Greta Gerwig as the director. Their chemistry on screen is remarkable, and obviously I am not the only one who noticed this, as the two worked together yet again in Greta Gerwig’s readaption of Little Women that came out this December. Currently they are working together again in The French Dispatch that will be released this July.

Overall, the cast in this movie was very unique. What I liked most about it is that the characters actually looked like relatable high schoolers, which made me connect to the movie so much more. Most of the time, I struggle to relate to teenage characters in movies because they are unrealistic.

Another interesting idea in this movie is money. All of Lady Bird’s motivations are to achieve the sense of freedom and pleasure she thinks money can buy. The poor relationship she has with her family is due to the fact that her family cannot afford to send her to a school out-of state, which Lady Bird hates. Lady Bird is so embarrassed by her family’s economic status that she pretends to be wealthy in order to become friends with the school’s “popular girl,” Jenna (played by Odeya Rush). Lady Bird’s mother, Marion (played by Laurie Metcalf), constantly is trying to teach her that having money and success isn’t equivalent to happiness. Although this message is a bit cliche, this film shows how complicated the idea of wealth is, especially when conceptualizing it at a young age, since it will take money to sustain Lady Bird’s vision of her future self.

This film is filled with much more than insights about money and wealth. The emotional focus of the film is the relationship between Lady Bird and her mother. Lady Bird, like all of us, has flaws. She fails to acknowledge how hard her parents work and she can be quite selfish. There were many instances in the film where she acted very ungrateful for all she had. A big lesson in the movie is that teenagers should be more aware of the emotional lives of their parents. This made me think about my own actions and my attitude towards my parents. Ronan and Metcalf did a great job of creating an emotional mother-daughter pairing.

Nonetheless, “Lady Bird”  is a great film. It was very much recognized during award season in 2018. Overall, it received 41 major nominations and 13 awards.  The forward-rushing narrative rhythm of the movie captures a feeling of adolescence ending quickly. I am now at the same age as Lady Bird is in the movie, and this movie has taught me to be more grateful for my upbringing as I will be leaving home in less than a year. I would recommend this movie to both adults and teenagers. I believe that many adults will be able to relate to the parents in the movie on wanting to work to support their family. I think teenagers will be able to learn a lot from this movie. Lady Bird deals with so many of the complications that come with growing up and it’s nice to see these issues from another perspective. Gerwig did a great job with this movie, and I look forward to seeing what she writes next.