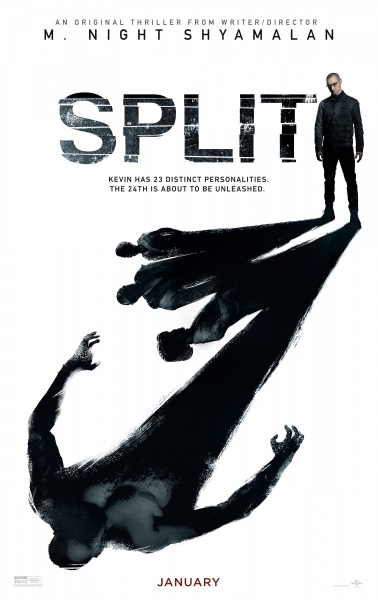 Imagine having multiple distinctive personalities, but you don’t clearly remember what one does once you’ve ‘switched’ to another. This physiological disorder, formerly known as Multiple Personality Disorder, is now called Dissociative Identity Disorder (DID).

Famous examples include characters in Psycho and the Strange Case of Dr. Jekyll and Mr. Hyde.

According to Psychology Today, “DID is a severe condition in which two or more distinct identities, or personality states, are present in—and alternately take control of—an individual. The person also experiences memory loss that is too extensive to be explained by ordinary forgetfulness.”

In more modern times, an example is the new movie Split written and directed by M.Night Shyamalan.

In this movie, main character Kevin (James McAvoy) suffers from DID and experiences an extreme case of 23 different personalities. The movie centers around one of his personalities kidnapping three teenage girls which plays a role in the unleashing of a 24th personality. The movie progresses with the girls trying to get out by using Kevin’s other and less harmful personalities to escape. But what’s the reality of the psychology behind the movie?

“It’s a range, sometimes you’ve seen some people with about five to six personalities,” said Psychology teacher Mr. Ryan Berba. “[But] there have been some cases where it has been more than that. So it’s kind of a case by case scenario. When you’re looking at a disorder that’s less than one percent [of the population] it’s tough to figure out just what the extremity is.”

In the movie, Kevin meets with his trusted psychiatrist, Dr. Fletcher (Betty Buckley). She claims that people with DID can experience biological changes, and each personality is as real as the others. This idea could appear to fall under the biopsychology perspective of psychology, but is her idea a stretch for fictional purposes, or do other trusted psychiatrists and psychologists agree with her?

“I think the part where you’re looking at where each personality feels as real as the next- I think that’s something that’s true,” said Berba. “I think if there was some biological evidence then psychiatrist would be able to create some medication or some drugs to relieve some of those symptoms, but looking at the research there hasn’t been any biological cause to it.”

So why did Shyamalan take his character in this direction?

“I wanted to take something scientific and psychologically proven and keep going with it. The first two, three steps have been proven, then the next one [whether or not the body chemistry of someone with a personality disorder can change depending on the identity] was not proven, but it’s a question. Do you believe what I’m suggesting,” said director M.Night Shyamalan in a recent interview.

IMDB’s plot synopsis takes this a step further: “some can also manifest unique physical attributes for each personality, a cognitive and physiological prism within a single being.”

In other words, each personality may manifest itself through distinct physical features as well. To the average person this might seem like a stretch, but is someone with DID able to change their physical characteristics personality to personality?

Berba doesn’t think so. He said that despite differing identities and personalities, a person suffering from DID can’t change their physical form.

Another valid aspect of the movie is the root of Kevin’s disorder. In the movie, it appears that Kevin’s disorder arose from repressed childhood trauma, which according to Psychology Today and Berba can be a trigger for DID, but the direct causes aren’t really known yet since less than one percent of the population suffers from DID.

Also, when Kevin’s real personality surfaces in the movie he is flooded with confusion and believes the year is still 2014, when it’s really 2016. According to Berba, this can be a common symptom for patients of DID, because they suffer from confusion of knowledge and reality.

In the movie, there are two to three personalities, Dennis, Patricia, and Barry, that appear to be the dominate personalities and can “control” when and if the 20 other personalities Kevin has can surface. This idea though can seem far fetched and fictional to the average person.

What critics stress about movies that tackle DID is that most of these movies are thrillers and horror movies, and therefore send a message that patients with DID are more violent and tend to hide their disorder, which in fact isn’t true for all patients.

According to Berba, if Hollywood has a movie they want to sell, “I fear that violence is always [going to] be connected to the disorder which isn’t always the case. Some people see the disorder as a coping mechanism, as a defense mechanism, but there have been cases where it has caused self harm as well, but looking at the symptom as more of that rather than causing harm to an actual other individual,” said Berba.

Overall, from a psychology perspective, Split appears to paint an accurate depiction of DID with minor exaggerations; added “extreme” case of personalities, patient violence, and horror aspects. Though, it is apparent that M.Night Shyamalan did in depth research on DID while writing this movie.