Katelyn’s Final Column: Why I chose to graduate early 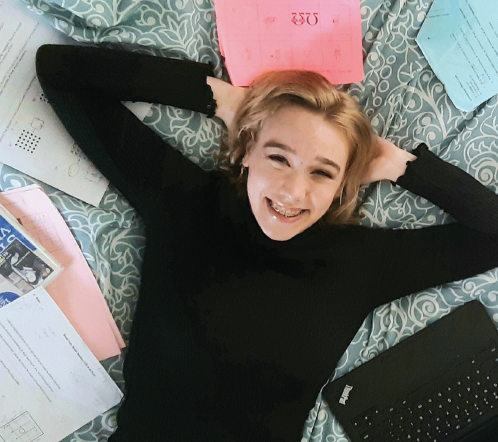 Katelyn, surrounded by her school work, is excited to graduate high school early.

The summer before my freshman year, I imagined my high school experience being akin to the ones I saw through
heavily-filtered Instagram posts and cheesy MTV soap operas. My famous four years would be a flurry of flashy, pom-pom crazy football games and tight-knit cliques and schmoozy red solo cup after parties.

I had romantic fantasies of what being a teenager was going to be like, fueled by my affinity for melodramatic coming-of-age novels and movies, a la “The Perks of Being a Wallflower.”

The three years following that summer, however, were starkly different compared to these idyllic daydreams. Sure, okay, I went to a handful of football games my freshman year, but I only remember the last one I ever went to, when I felt so out of place among the sea of my sparkly blue-and-white faced classmates that I began hyperventilating. In my panicked, self-conscious state, I sprinted out of the stadium and then walked a mile and a half home in the dark.

Friends were hard to come by for me those first two years, let alone any parties. I was left stammering and tongue-tied when it came to conversations with groupmates and table partners, leaving me red in the face for the rest of the day. In a school of 1,500 kids, I felt alone.

My worst memory of this time was in freshman gym class, where girls mocked me while playing basketball and spread rumors about my sexual orientation in huddled, secretive groups, side-eyeing me and giggling the whole time.

I remember one day in particular where our teacher ordered us to pair up for the day’s lesson. All the gym clothes-clad girls parted like the red sea at the shriek of her whistle, leaving me alone among the dust. My teacher had to forcibly coax someone out of a group of three just to be my partner, a chore the girl begrudgingly accepted. As a freshman, a lot of things were still uncertain, but the one thing I was sure of was this: I did not want to spend four years in a building I dreaded walking into every morning.

I remember several tearful evenings where I stood in the living room, begging my parents to let me be homeschooled, but the response was always a negative one. I even asked to transfer schools, another suggestion which was shot down.

My last viable option was to graduate in three years instead of four. It would mea taking US History in a stuffy, monotone summer school classroom and sacrificing treasured senior traditions like prom and graduation. I wasn’t even sure if it was possible with my current schedule. But in my eyes, it was better than the alternative of another taxing year in high school.

Sophomore year came around and things weren’t much easier for me, so that January, I sat down with my counselor and told her my plans. After several minutes of counting credits and double and triple checking my classes, we finally mocked up my last schedule of high school. I was going to graduate early.

That was nearly a year and a half ago. Since then, there have been moments where I second-guessed my choice to leave early. Friends and classmates constantly reminded me that I would be missing out on the famous “High School Experience” I’d once dreamed about. There would be no glitzy prom to plan with my friends or tie-dye Color Wars assembly to cheer at. Some peers even took it upon themselves to inform me that there was no way I could get into a decent college with my minimum number of high school credits.

The cancellation of in-person school for the rest of the ‘19-’20 year also made my early graduation plans more difficult. While many of my fellow Junior friends anticipate resuming their high school lives in the fall, that is not the case for me. When I stumbled out of school on March 13th, I didn’t realize it would be the last time I walked out as a student of Vernon Hills High School.

There were many friends and teachers I never got to say goodbye to in person and water polo games I would never get to play again. It’s easy to get sentimental about the past, especially with something as heavily-romanticized
as high school, an institution that represents the era of adolescent milestones — first loves, first dances, sports victories, lifelong friendships.

But now, I recognize that there isn’t some magical formula to achieving the “right” kind of high school experience. Some people thrive in that environment, and others won’t particularly miss it once they leave that building for the last time. To me, it was just another period of time in my life as ordinary and equally memorable as my elementary and middle school years, and it’s taken me awhile to realize that there’s nothing wrong with that.

As of now, I plan on attending community college this fall, a few months after my 17th birthday. Especially with the stay-at-home order in place, this wrap-up of my high school journey feels appropriately anticlimactic. There is no grand, “High School Musical”-esque graduation ceremony, and certainly no wild grad parties with finger foods and deafening trap music.

But honestly, I’m okay with that. I think I’m ready to move on.