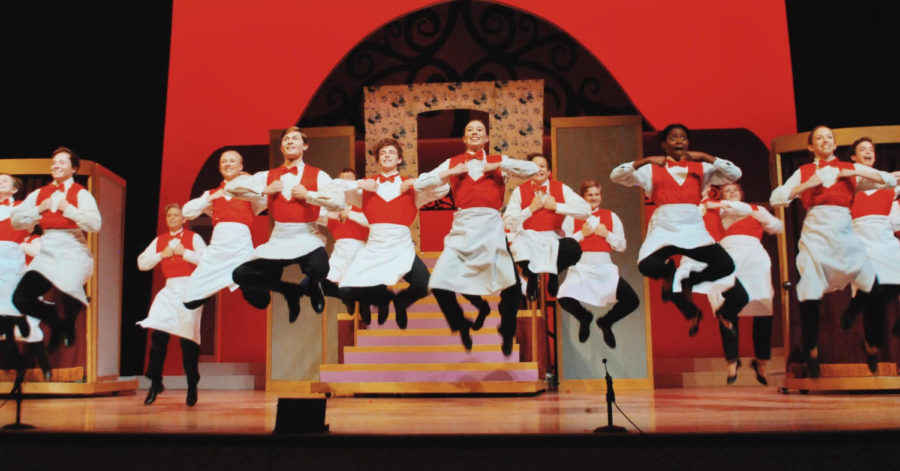 The cast of Hello Dolly jumps as they dance during the Harmonia Gardens Restaurant scene.

This fall, VHHS put on the musical, “Hello, Dolly.”

“Hello, Dolly” is like the grandmother of modern musicals. Its influence can be seen in many recent musicals like “Newsies,” “West Side Story,” and “Hamilton.”

Despite recognition and awards, its plot has no stakes or looming threat, which makes the world the musical takes place in seem a little too perfect. The protagonist starts off with promise as a young boy from a rundown part of New York who dreams of bigger things.

The plot hits its first bump in the hat shop when Cornelius just stumbles into the arms of his perfect woman. He proceeds to stumble through the day perfectly.

This is the first major problem with the musical. The characters seem to have plot armor that gets them out of any sticky situation. Run out of cash? Boom! Found a wallet. Going to court because you incited a riot and assaulted a man? Boom! Sing a song about true love and get your evil boss jailed.

This is the main reason that I was excited to see what the theater program could do to spice up the classic. My excitement was fulfilled as our theater group was innovative in many ways that made watching “Hello, Dolly” more fun than ever before.

The actors played their parts in a way that is nostalgic to the original while putting their own spin on their characters.

Sasha Shor as Cornelius Hackl is believably naive with a heart of gold, but a strong backbone. Jack Farag as Horace Vandergelder is delightfully mean with hilarious hijinks.

There was also the star performance of Sari Gluck as the titular character Dolly Levi. She plays Dolly perfectly, giving off an air of mystery while managing to stay entertaining throughout the entire musical that keeps us guessing as to her true nature.

The scenery was just as important as the actors. A majority of the time, shows of “Hello Dolly” have basic 1950s set dressing, yet Backlight has put a unique spin on the setting. The simplistic pastel colors on buildings with black outlines remind me of a Dr. Suess book in its simple complexity.

Overall, the “Hello, Dolly” production put on by VHHS was extremely refreshing in all aspects and does a great job amazing and surprising the audience with unique twists.